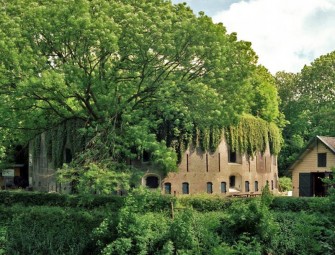 The Forts are completely or partially hidden. This was of course due to strategic importance. But whoever discovers the area with us cannot have failed to notice these huge beautiful buildings. And what is even more special is that they can all be viewed. Imagine yourself at that time and discover the beauty of these buildings.

The Old Dutch Water Line is the first water line that was built in the Netherlands. In 1589, Prince Maurice of the States of Utrecht and Holland had to investigate how the Republic of the Seven United Netherlands could be defended against possible attacks from neighboring countries. He came up with the idea of a water line, a series of areas that can be flooded ("inundation"). Where higher-lying land changes into low-lying polder area, this is easy to achieve. Ten to twenty centimeters of water was often enough to make innumerable ditches and ditches invisible. Soldiers on horseback and guns got stuck and it was too shallow to let boats sail. The flooding of land was done by opening locks and breaking dikes.

The Waterline still consisted mainly of paper drawings when in 1672 our country was attacked by France, England and German dioceses. From the east, an army of around 80,000 to 100,000 French soldiers entered, en route to Amsterdam and Utrecht. People had to flood areas quickly, man the forts and defense works and build new ones. The French were stopped, except for a group of soldiers who could come behind the line at Woerden because the water on the land was frozen. However, in 1673 all Frenchmen were out of the country and the water line could be improved.

The Old Dutch Water Line runs from Muiden to Gorinchem. In 1815, the construction of the New Dutch Water Line was started, aimed at protecting the city of Utrecht. A number of existing forts and defenses became part of this new water line, a number were canceled.