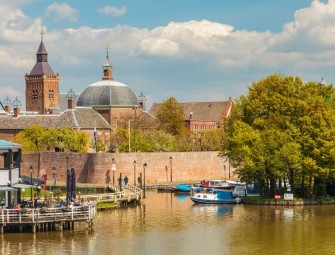 In the Middle Ages, Leerdam was owned by Mr. Van der Leede and Van Arkel. After a very tumultuous period, it came to Mr. Van Egmond. In 1498 the Heerlijckheid was elevated to Emperor Maximilian as a County. It thus became an independent area, separate from Holland. This entailed important advantages in, for example, the tax area. Frederik van Egmond became the first Count. Through the marriage of Anna van Egmond with Prince Willem of Orange, Leerdam came into the possession of the Oranges. Princess Beatrix is still Countess van Leerdam. The choice for the Reformation was the reason that the Spaniards seized the city in 1574 and thereby largely destroyed the castle. The arrival of the French in 1795 marked the end of the County of Leerdam. From the 18th century, urban culture was strongly influenced by the glass industry and the wood processing industry. The founders of the first glass factory, were exempted from various taxes and also found their financiers in Leerdam. De linge served for the supply of raw materials and the removal of the glassware made. This river was also of great importance for the wood processing industry. The wood was supplied by ship from the felling areas, while after processing it could also be shipped via the water. The first glassblowers were originally from Germany. Because of their traditional work in "de Glashut", the glassblowers soon got the name "hutters".