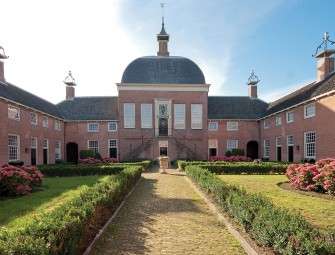 Maria Ponderus (1672-1764) was the second wife of Pieter van Aerden (1643-1719). Their two sons died in the Dutch East Indies and her daughter had died before she died at the age of 92. Maria came from a well-to-do family who had good contacts with the House of Orange. Pieter, notary and attorney in The Hague, collected paintings from artists of his time from a hobby. The paintings hung in their home in The Hague, but were transferred to the Regents' Chamber of the Hofje according to the will of Maria. In her will she devoted a large part of her legacy to the creation of a courtyard for less fortunate female family members. Most of these women were found not to live in The Hague, but in Leerdam. Prince William V, Count of Leerdam, agreed to the construction of the courtyard on the spot where the Heeren Van Arkel castle had been. The paintings collection can still be seen in the rooms that have been converted into museum rooms under the Regentenkamer and in the Regentenkamer itself. Some of the highlights are a still life by Pieter Claeszn, the painting "Two smiling boys by Frans Hals", a forest view by Jacob van Ruysdael, two portraits by Gerard Ter Borch and a garland with flowers and fruits by Cornelis de Heem. Among the many (family) portraits is also a portrait of Maria Ponderus made by an unknown Dutch masterly painter.