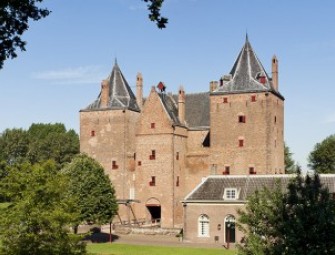 Loevestein Castle is a Dutch castle, in the municipality of Zaltbommel, to the west of the villages of Brakel and Poederoijen.

Loevestein was built around 1368 by Dirk Loef van Horne, lord of Altena. It arose on a strategically located headland, at the place where the rivers Maas and Waal merge to the Upper Merwede. It was used to levy tolls.

During the Hoekse and Kabeljauwse disputes, Loevestein was a prison for opponents of Jacoba van Beieren. Loevestein was also a state prison during the Republic. Hugo de Groot served a life sentence here from 1619, until he escaped in a bookcase in 1621. In 1631, seven Remonstrant pastors escaped in an empty beer barrel. In 1650 Stadholder William II had six members of the state locked up on Loevestein, including Jacob de Witt, mayor of Dordrecht.

"Did Hugo de Groot fit into a bookcase?"

From the 17th century Loevestein was part of the Dutch Waterline. Loevestein has largely been preserved as a medieval castle.

The castle is nowadays a Rijksmuseum. It is open to the public. The castle can also be reached with a foot ferry from Woudrichem.

The natural location of Loevestein has always had a major influence on the accessibility of the castle. Fighting against the water has been going on since the beginning. Even now, there is still a chance of high water every year, as a result of which the only access road to Loevestein will be flooded and Loevestein will become inaccessible (by land). National policy in the field of water management also has consequences for Loevestein. The recent memorandum “Room for the River” could mean that Loevestein will become an island permanently in the future.

The Old Dutch Water Line was a Dutch defense line based on inundation.
After inundation in 1573 (Alkmaar), 1574 (Leiden) and 1629 (between the Zuiderzee and the Lek) had already been attempted on a small scale, in the disaster year 1672 a strip of land was rushed under water to stop the French troops from they would conquer Holland. The line ran from the Zuiderzee to the Biesbosch, from Muiden via Woerden and Goejanverwellesluis to Gorinchem. Utrecht fell outside the line, because this city had already been conquered by the French at that time.
From 1816 the line was shifted to the east, so that Utrecht was within the line.
This new line was called the Utrecht Line. Since 1865, the line has been called New Dutch Water Line.