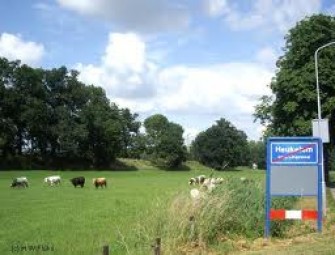 Sometimes the walker wonders: "are there still places in the area that are worth exploring while walking?" Then there is Heukelum, a beauty of a mini town in the safe embrace of mother Linge

.
Heukelum is an ancient town about 3 km south of Leerdam. We start at the church. From the medieval parish church it has remained a beech choir with two later cross chapels. The grave of a distinguished family dreams outside, in front of the choir, in drizzly weather. We walk through the Torenstraat, to Het Voorste Gewind

.
On the corner of the street to the cross road, bronze is immortalized: P. Dorresteyn, physician in Heukelum from '45 - '63. At the end of the Dwarsweg lies the Appeldijk, certainly one of the most beautiful dikes that people can walk on. It is between spring and summer. The blossom has made way for dozens of apples. They shine like the cheeks of a toddler with mother on the back of the bike. The elder tree along the dike is not that smooth, it still blooms a hundred. The flowers stand out against a gray sky like a fine Bruges lace work. Clearly, rain is coming in the distance. What does it matter, that is how the river has its charm. Bubbles bubble on the water, make small spacecraft on the surface, they are UFOs from a distant planet. With a little imagination you can get everywhere and a little further the lie stands for a moment of reflection. This is the hour of truth. There used to be an enormous century-old lime tree that served as an umbrella. Unfortunately it had to be cut because it was affected by a fatal tree disease. Now young plants bravely try to revive old times. What remained was the lie couch. "Who is Heukelum's biggest liar?" I ask the man on the couch. "Maybe I do, but now I lie" is the sumptuous answer. We have a chat. The man who has never left his small town and the walker, both wanderers on the square meter, meet each other. You don't have to go far to leave the everyday behind.

At the harbor it is a busy summer activity, sailing on De Linge is a pleasant pastime.

We continue our way along the Molenkade and Kruissteiger. Via the "pedestrian promenade" we arrive at the Lingewal. We slide on the narrow path to the castle. It is an eighteenth century country house. "Huys te Heukelum" or Merkenburg was once founded by, how could it be, one of the Jannen van Arkel. This castle was the last estate inhabited by the Van Arkels. The country house is built around the tower of the medieval castle. The original 14th century entrance tower of the castle is still recognizable in the middle of the facade. Immediately after the former pumping station and the Kolenschuur we turn right, a lane through the field. At the end turn right again, back to the town. Seen from here, the clear white drawbridge gives the castle even more prestige.